On this page are some of the other memorials in (and outside) the church. Only a few of the memorials to be found in the church are shown here, as not all are legible in a reasonably sized photograph. Even for those that are included here, not all details are easy to read; there is, however, a very good page of information on the men named on the war memorials at the Roll of Honour web site.

There is a prominent wooden memorial in the north aisle of the church that lists the names of all combatants in the First World War who came from the parish, making special mention of those that died. There is a less prominent memorial, in the church porch, giving just the names of those who died, but explaining that it is to them that the Calvary in the churchyard is dedicated. 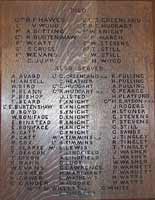 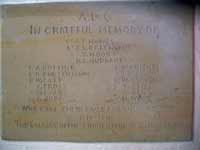 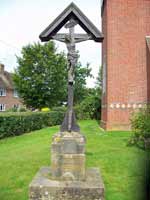 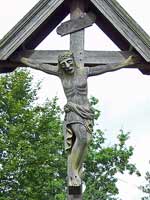 Apart from the Willett Memorial windows, the commemoration of the dead of the second world war is much more subdued. The reredos behind the altar was erected in their memory, and there is a small memorial tablet below the wooden one for the first world war to announce this and to list their names. 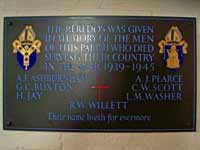 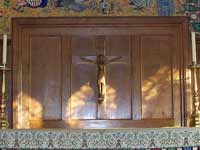 Two Memorials from the Early 1930s

There is no common design to memorials in the church. One of the greatest contrasts in style is between two tablets, dating within a year and a half of each other, and placed one above the other on the south wall of the church. 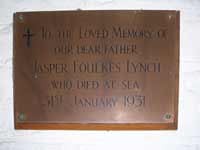 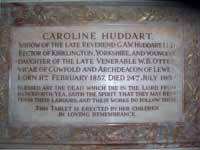