By the standards of Sussex villages, neither Scaynes Hill itself nor St. Augustine’s is old. Until the nineteenth century, Scaynes Hill was a number of farms at the south-eastern edge of the parish of Lindfield. During the nineteenth century, however, cottages began to be built here, and by the eighteen-fifties it became clear that a school was required. The Reverend William Henry Stallard (c1831-1872), who from 1856 to 1860 was Curate of Lindfield, collected funds for the work, and in 1858 the nave of the present church was built to a design by the architectural partnership of E & W G Habershon; it served as the school during the week, and as a chapel of ease for Lindfield parish on Sundays. 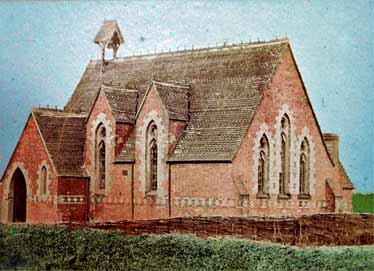 It became solely a chapel of ease in 1879, when the school moved to what is now called “Old School House” further north along Church Road. In 1880 the church was enlarged, with the addition of a side aisle, the chancel, and the tower, paid for by the Rev. Frederick Willett who was soon to act as a Voluntary Priest-in-Charge. In 1902 a stained glass window by Charles Eamer Kempe with his trademark wheatsheaf on the crossgrip of the sword, depicting St Martin of Tours and commemorating Boer War soldiers Cecil Shaw and the Rev Frederick’s older son, Frederic Wilfrid Bagnall Willett, was put into the south side of the chancel.

In 1908 the carved chancel screen and pulpit were installed, thanks to Arthur Hope Rydon (1859-1930), a solicitor originally from Islington, who had moved to Awbrook Farm’s New (later East) Lodge in the closing years of the nineteenth century. The organ and marble sanctuary paving were also installed at this time.

Five years later, in 1913, the wooden columns separating the nave and the side aisle were replaced by stone ones, narrow windows in the south wall were replaced by wider ones, a stained glass window consisting of two lights (the baptism of Jesus above, the children coming to Jesus below) designed by Arthur Anselm Orr (1868-1949) was put into the tower in memory of Arthur Rydon’s landed proprietor father Henry (c1814-1885) and his mother Annie (c1823-1896), and electric lighting was installed.

In 1919 wooden panelling was installed at the west end of the church, and around the font. This was again the work of Arthur Hope Rydon. After his death on 16th July 1930, a memorial to him was put up at the end of the side aisle, a memorial that does not appear to its best in a small photograph.

It was also in 1930 that Scaynes Hill became a parish in its own right, with St. Augustine’s the parish church.