The man who was later to be canonised as St. Augustine was originally a monk in Italy, but he was sent out, somewhat unwillingly at first, to become what has been described as the Apostle to the English. 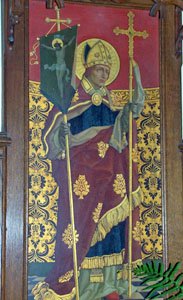 A painting of Augustine
from our Church chancel

Augustine was the prior of St. Andrew’s monastery on the Coelian Hill in Rome when he was chosen by Pope Gregory the Great to lead a mission to convert the English, towards the end of the sixth century.

There had been Christianity in the British Isles from an early date. Alban, the first recorded Christian martyr in Britain, probably died in the middle of the third century, during the reign of the Roman emperor Decius. In the parts of Britain still in native British control Christianity endured, but the invading Angles, Saxons and Jutes, the English, had brought their own pagan religion with them, and it was these that Gregory wanted to evangelise. To this end, he worked out a detailed plan for two archbishops, based at London and York, each with twelve diocesan bishops under them. It used the most detailed and up-to-date information about Britain available in Rome. Unfortunately, this information was about a hundred and fifty years out of date. The degree of cultural cohesion and social structure Gregory’s plan required was no longer to be found.

Augustine set out from Rome by sea with a party of thirty or forty monks in 596, to land at Marseilles and make their way by land through the territory of the Franks to the English channel. However, as soon as they were in Frankish territory they became disheartened, and Augustine went back to Rome, to ask the Pope to cancel their mission. Gregory sent Augustine back, and they reached the kingdom of Kent in 597.

King Ethelbert of Kent was married to Bertha, a Frankish Christian princess. It had been a condition of their marriage that she should be able to continue to practise her religion, so she and her household worshipped in an old Romano-British church in Canterbury, St. Martin’s. This provided the initial point of contact. Augustine and his party were directed to land at the Isle of Thanet, and to meet with Ethelbert in the open air, as Ethelbert was afraid of magic, which was held to be most effective and powerful in closed rooms. They approached the king carrying a silver cross as their standard, and the likeness of our Saviour painted on a board and were well received by Ethelbert, who granted them a house in Canterbury. He gave them permission to preach, and although he told them that he could not give up the ancient beliefs of his people for ones that were new to him without considering them very carefully, he promised to think about becoming a Christian.

It is not clear when Ethelbert was baptised; one tradition has it that it was on Whit Sunday, 2nd June 597, but it is certain that it had happened by 601.

Augustine did make further progress in his mission. A number of Romano-British churches in Kent were repaired, the monastery of St Peter and St Paul was founded, and negotiations were carried out with King Sabert of the East Saxons which led to Mellitus (the leader of a second group of missionaries sent by Gregory, which reached England in 601) being consecrated as Bishop of London in 604. He was unable to expand the reach of the Latin church much further, and his relations with the native British bishops, who did not feel compelled to follow rulings from Gregory in Rome, were not smooth.

Augustine died in late May 604, after just eight years in England, the first Archbishop of Canterbury. In the Church of England and other Anglican churches St. Augustine is comemmorated on the 26th of May, which is most widely held to be the date of his death.

In the side aisle of our church are a sequence of paintings by Julia Rushbury, given in memory of William Boden by his family and friends, that depict events from the life of Saint Augustine. One panel shows a miraculous cure attributed to him, in which at a meeting with the British bishops, he alone was able to restore sight to a blind man. The significance of the other panels will probably be clear. As so often, clicking on a small image will cause a much larger one to be displayed.